As white colonists migrated west, invading and seizing Native and Mexican lands, law enforcement developed a bit unevenly. In many areas “order” was kept by extra-legal vigilante groups or other unpaid personnel. But eventually, as settlements grew into towns, most developed systems of town marshals or county sheriffs.

By the late 1800’s, most sizable towns across the continental U.S. had in place what we would consider “traditional” local law enforcement agencies. Unfortunately, many of the laws those officers enforced were oppressive for communities of color.

Throughout our country’s history, when we’ve experienced periods of economic insecurity, white people in power have often scapegoated different ethnic groups to try relieve our anxiety. We identify the group as the “other” and place the blame for our troubles on their culture and customs. We usually choose groups who are already marginalized and without political power: indigenous peoples, recent immigrants, former slaves.

One such period was the late 1800’s in the Pacific Northwest. Chinese workers were imported by the thousands in the mid-1800’s to work (under horrific conditions) on the Transcontinental Railroad. When the project was complete, Chinese immigrants settled in Northwestern towns to work in the mines or set up businesses of their own.

However, when competition for jobs became fierce, resentment grew against the Chinese immigrants. Thus began a long season of violence, expulsion, and ethnic cleansing across the region. Local law enforcement officers often took part in these “riots.”

In 1885, the mayor and the chief of police of Tacoma, WA, coordinated a systematic purge of every person of Chinese descent in their city. After several weeks of warnings about the upcoming expulsion, the 200 remaining Chinese immigrants were “peacefully escorted” out of town by an armed group of police and regular citizens, and herded on to trains bound for Portland. This “lawful and legal” exercise became known as “the Tacoma Method” and was held up as a model to surrounding towns, because no one was killed in the process.

Another notable period of government-endorsed ethnic scapegoating took place during the Great Depression. This time, Mexican immigrants were the main target, particularly in California.

High rates of unemployment prompted white leaders to create a plan to deport large numbers of Mexican immigrants, theoretically opening up employment opportunities for others. “American Jobs for Real Americans,” the slogan went. Never mind that many Mexican American families had lived on the land for centuries, far longer than their white counterparts; America had just moved the border on them. The sentiment was that, even if Americans of Mexican descent were born in our country, it was in everyone’s best interest if they were “repatriated” to their “mother country.”

To bolster their argument, white leaders spread racist lies about those of Mexican descent. In 1935 Congressman Martin Dies from Texas wrote a piece for the Saturday Evening Post in which he stated:

There are 3,500,000 foreigners who came to this country illegally and with utter disregard for our laws…Among this number are hundreds of gangsters, murderers and thieves, who are unfit to live in this country and, God knows, unfit to die in any country.

This is in spite of the fact that President Hoover’s Wickersham Commission had proven this untrue in their 1931 Report. Dr. Edith Abbot, a surveyor on the Commission, concluded, “It is easier to charge our crime record against immigrants than against an inefficient and corrupt system of police and an outworn system of criminal justice.” 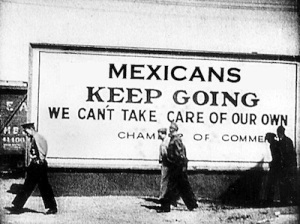 In 1931, local and federal law enforcement officials began carrying out raids in Los Angeles and the surrounding areas. Anyone who appeared to be of Mexican descent would be rounded up and jailed, then offered the choice of remaining in jail or utilizing a one-way train ticket out of the country. In at least one instance, those caught in the raid were simply marched directly onto the trains and sent to the Mexican interior.

Between 1929-1936, approximately 2 million people of Mexican descent were deported from our country; it’s estimated that at least half were U.S. citizens.